It is generally claimed that the probability of a new drug candidate compound proceeding to non-clinical trials is 1 in 4,469*. For DWTI, however, this figure is roughly 1 in 200. (*Source: Japan Pharmaceutical Manufacturers Association, Textbook 2018-2019).
The difference between these figures is an indication of our technological prowess, which also enables us to create compounds that offer greater possibilities.
Below are the three drug discovery engines that highlight our technological capabilities. 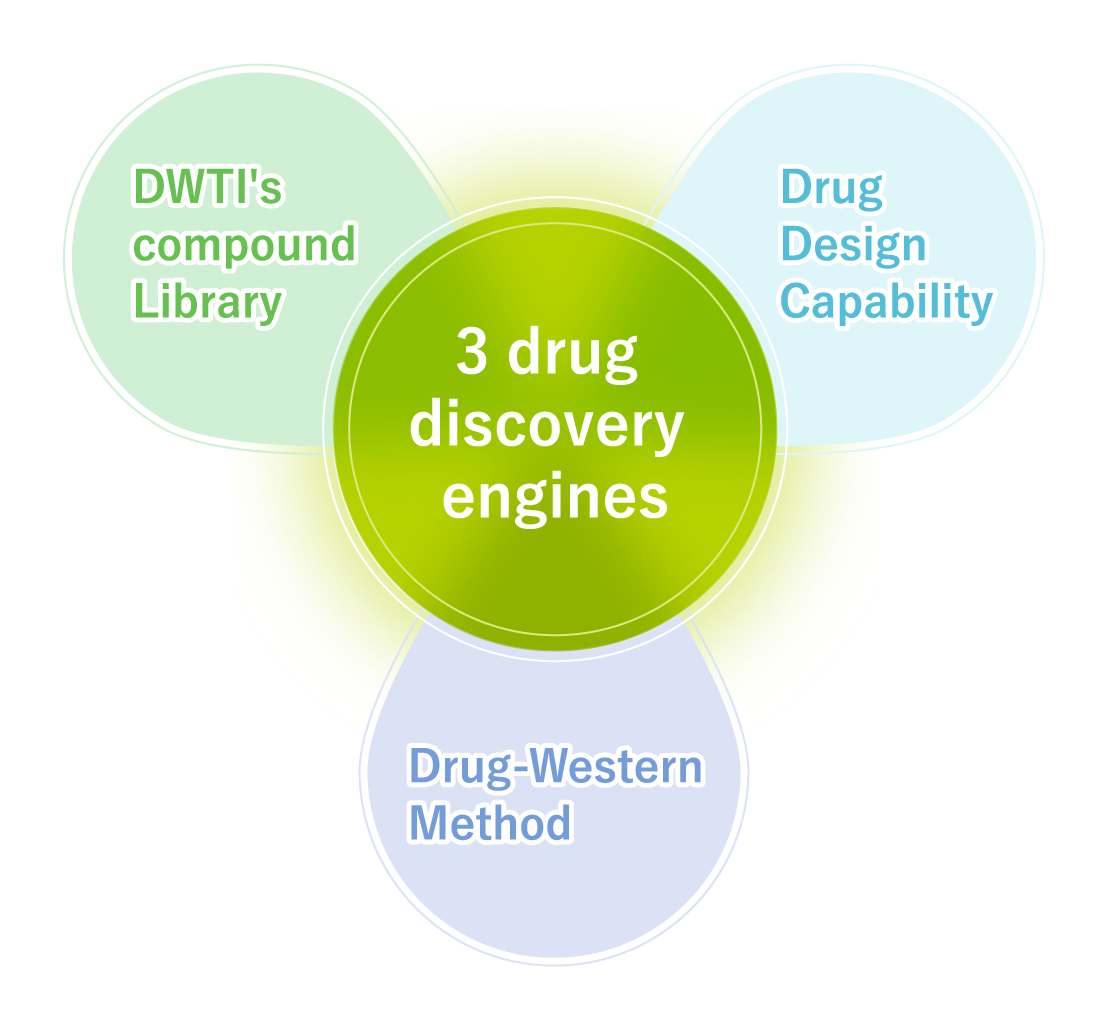 DWTI’s compound Library
Our compound library includes an extensive array of the various protein kinase inhibitors we have accumulated through many years of research activities. Among the compounds in the library, those with excellent drug efficacy, safety, and physical properties are called seed compounds. From these, new drug candidate compounds have been created.
The library also contains several compounds that offer superlative inhibitory effects but were ultimately not developed as drugs. However, some of these compounds are being sold as reagents for use in basic research, and continue to be used in research laboratories around the world.
Our library compounds are attracting attention from other companies because they contain protein kinase inhibitors that have been approved for pharmaceutical purposes. Through joint drug discovery activities, we are working to create unprecedented new kinase inhibitors.
Drug Design Capability
The wealth of molecular pharmacological data and analytical capabilities we have derived from the study of intracellular signal transduction pathways give us great competitive strengths in terms of drug design capability, or the ability to design new drugs at the exploratory research stage.
Although the chances of successfully developing a new drug are said to be just one in tens of thousands, through our high-level drug design capability we are creating new drug candidate compounds with a high probability of success.
Drug-Western Method
The Drug-Western Method is a method of examining the kind of protein in the body a drug will bind to when administered.
DWTI invented this method by applying biotechnology, and previously held  the patent for it.
Generally speaking, finding out which protein a drug binds to requires a cumbersome process that involves purifying large amounts of protein. However, the Drug-Western Method allows target proteins to be identified using only small amounts of protein.
By isolating the genotype of a protein that binds to a drug under certain conditions and analyzing its gene sequence, it is possible to identify which protein the drug binds to. Then, by examining the function of that protein, the potential for new drug development can be clarified.
Furthermore, identifying the molecular target of a new drug in the early stages of development not only sheds light on the efficacy and safety of the drug, but also has a major impact on the efficiency of subsequent clinical trials and other drug development efforts.

Fundamental research and elucidation of mode of action 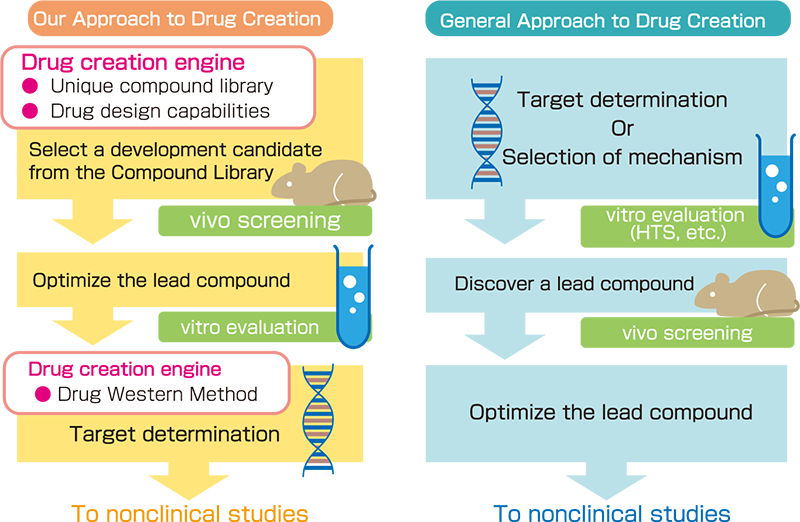 Our seed compounds are inhibitors of protein kinases that we have accumulated in the past.
A protein kinase is a critical enzyme in the body which has the role of intracellular signal transduction function such as differentiation and proliferation of cells.
We are creating effective drug candidate compounds by advancing development of such inhibitors that control the function of the protein kinase.

Learn more about our pipeline